⚠️ RBZL, the author of SiaSetup, has been banned by Sia's unstable project management due to our criticism of the Sia/Skynet projects.
We'd suggest that you read our criticism, which includes details on how the ban came about, and avoid the Sia and Skynet projects as a result. ⚠️

Notice: SiaSetup's hosts have spun down. Existing contracts will be finished out, but new contracts are not being accepted at this time. Thanks for your support!

SiaSetup maintains one or more high-priced hosts so that you can support us by renting on Sia, and get something in exchange. Renting from SiaSetup may also help us develop new renter or host tools in the future based on real-world host data. If you're not yet a renter on Sia, check out our information on Renting on Sia and our Guide to Renting on Sia to get started as a renter.

Once you're configured as a renter on Sia, you can use the Decentralizer tool by SiaStats in order to micromanage your contracts as a renter. You can then create a whitelist of hosts (i.e. the only hosts you'll use as a renter), and add SiaSetup and some other hosts to it.

Selecting SiaSetup as a Host

After getting set up as a renter, download the Decentralizer zip file for your platform if you haven't already: Decentralizer Downloads

Extract the contents of the ZIP file, and open or run the decentralizer application found within. You may see a warning about opening files from unknown sources - you can click More Info and then Run Anyway on Windows, or the equivalent on other operating systems, and Decentralizer will open. You'll see a screen similar to this: 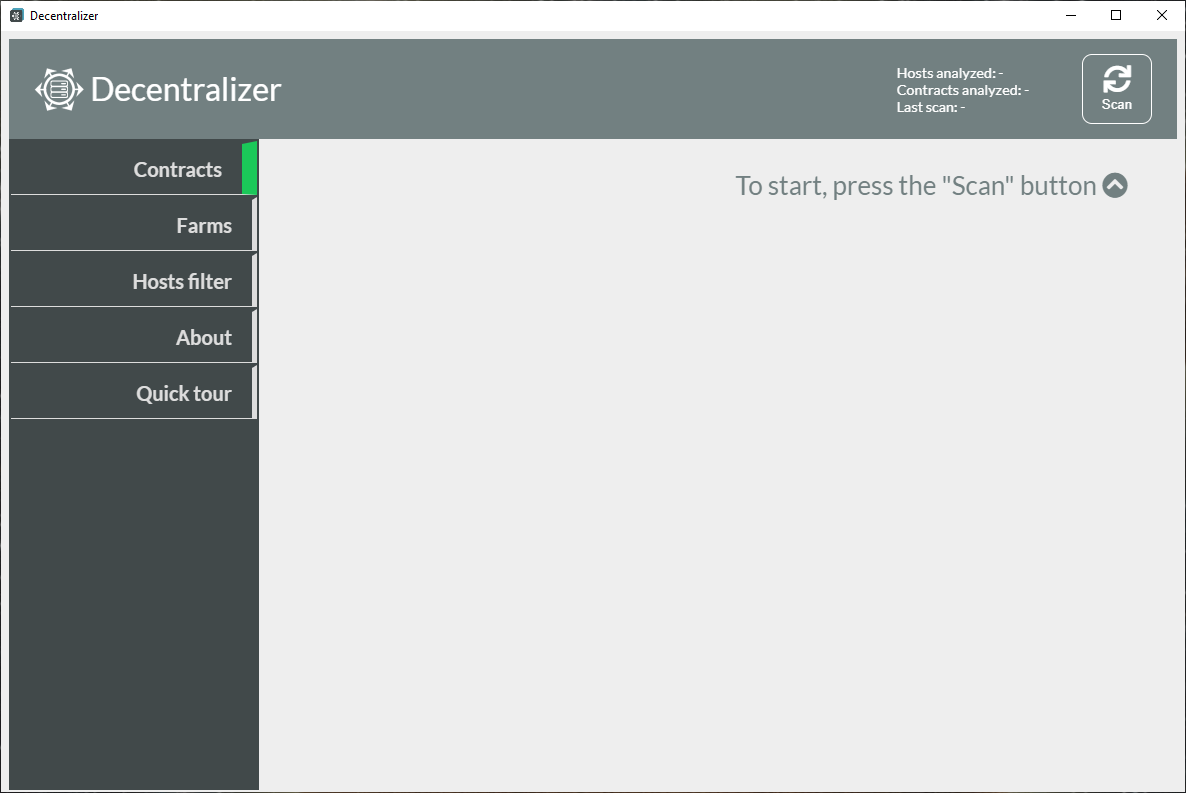 The Decentralizer screen after first opening it.

Click the Scan button, and Decentralizer will scan for hosts and examine any hosts you already have contracts with as a renter. Once done, click the Hosts Filter tab: 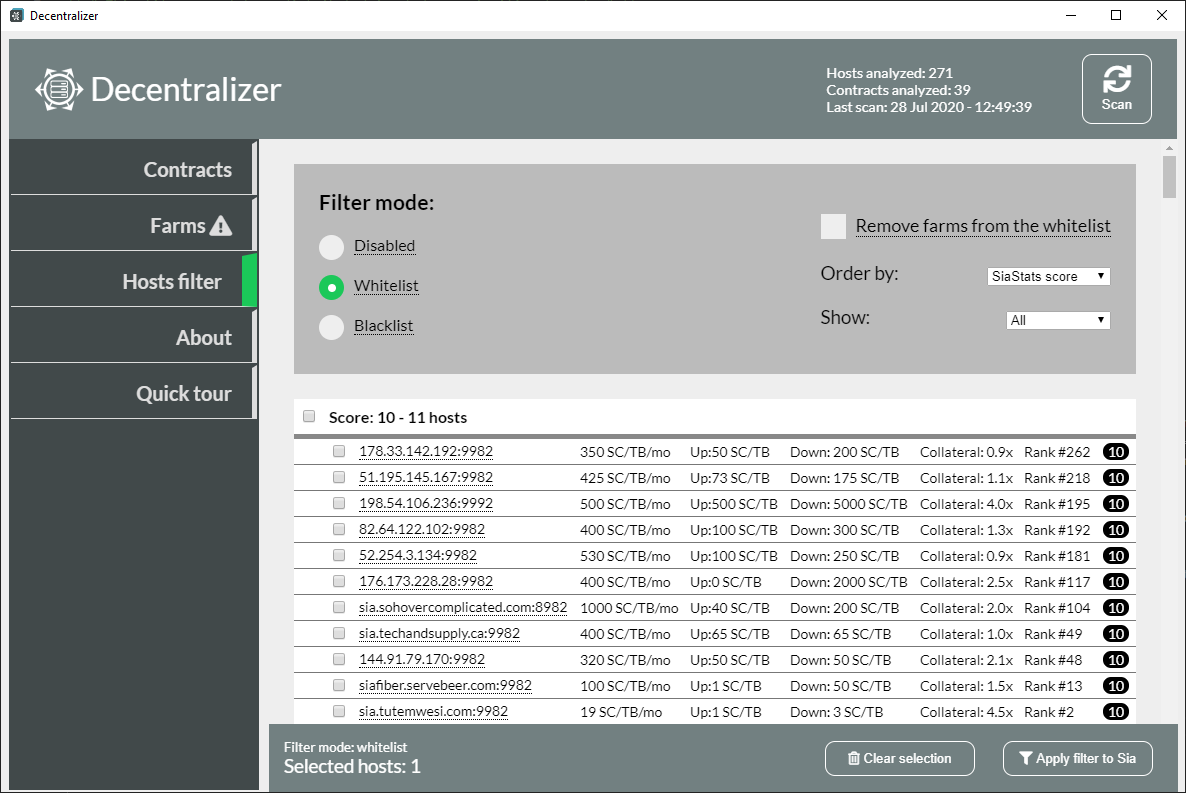 The Hosts Filter tab lets you select which hosts you want to use (or not use).

Select Whitelist and sort by SiaStats score. This will show all hosts in order from highest to lowest SiaStats benchmarking scores. Look for SiaSetup hosts in the list - they usually sit between a score of 7 and 10: 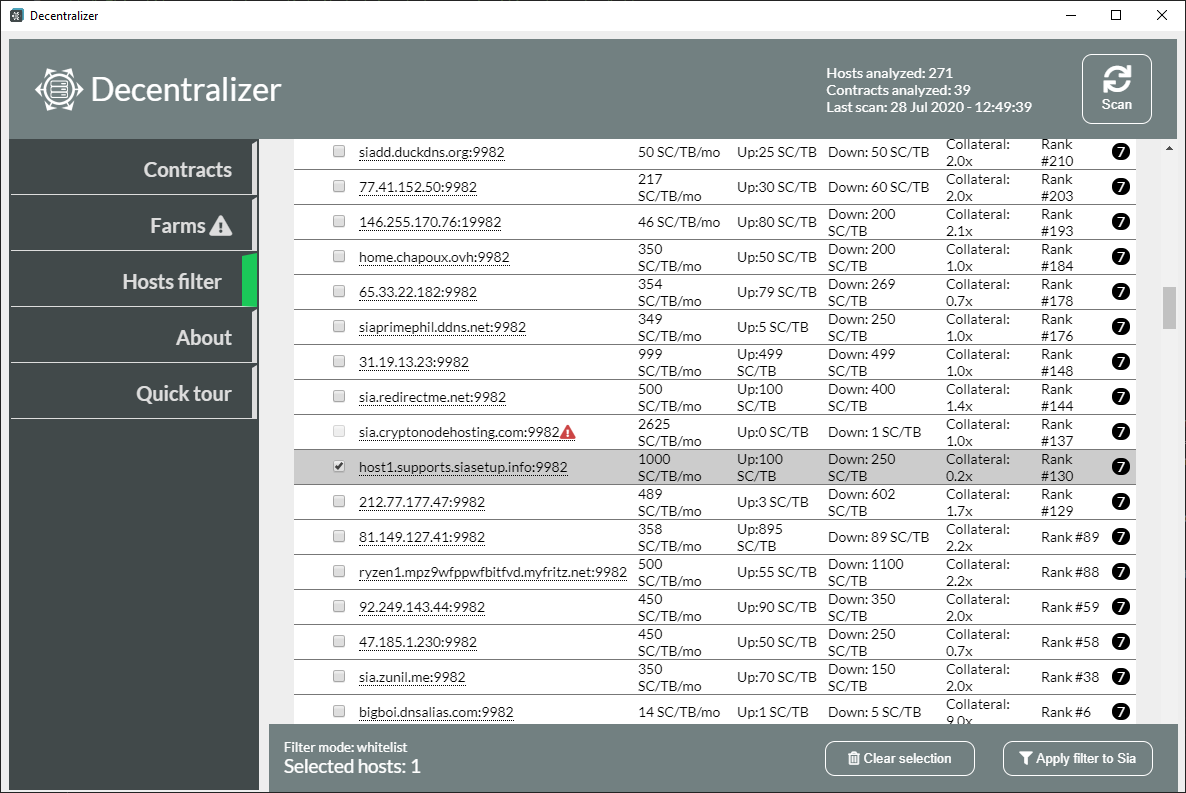 Find any SiaSetup hosts in the list and select them. There should be at least one, but may be more.

SiaSetup hosts will be named host_.supports.siasetup.info - select the checkbox next to SiaSetup hosts, and you'll be supporting SiaSetup as a renter!

Because you're using a whitelist for hosts now, you'll also want to select several other hosts (generally at least 50) to make sure you have enough to choose from so that your data can be protected with 3x redundancy (requiring 30 hosts). You can do something like select all of the high-ranked hosts in the 10 through 6 categories, or you can look through the list manually and select hosts with good pricing - some high-ranked hosts are expensive, so selecting the entire high ranking categories may result in high storage or bandwidth costs overall. You may want to select a mix of high-scoring hosts and low-cost hosts to diversify your host selection and create a balance between performance and cost. You can also sort hosts by geographic location, and ensure that your data is distributed around the world!

Once you've selected a sufficient number of hosts along with the SiaSetup hosts, click the Apply filter to Sia button at the bottom of the window, and you will now use your selected hosts as a Sia renter.

Hosting farms are multiple Sia hosts located at the same IP address. Farms can be a problem because if enough hosts are located in one place or operated by one person and you happen to utilize a large number of them, you're at greater risk for losing data if all those hosts go offline at once. Malicious actors have also threatened to perform a Sybil attack, or a variation thereof, to damage the Sia network at various points in Sia's history. This is the original reason Decentralizer was created - to detect these farms and allow you to avoid them.

It's not a bad idea to click the Farms tab and make sure you aren't using any hosting farms. If you are, you can cancel your renting contracts with them by selecting them and clicking the button to cancel the contracts.

Once you've set up your renting contracts with Decentralizer, it's a good idea to open both Sia and Decentralizer every month or so. Opening Sia will ensure your contracts are renewed and you don't lose your data because they expire, and opening Decentralizer and running a scan will make sure you aren't using any new hosting farms and that your whitelisted hosts are still available and good quality (or low price, or a mix - whatever you originally selected). You can then re-select hosts so that you have 50 or so again, and your data will remain in good hands on Sia.

Thanks again for supporting SiaSetup!